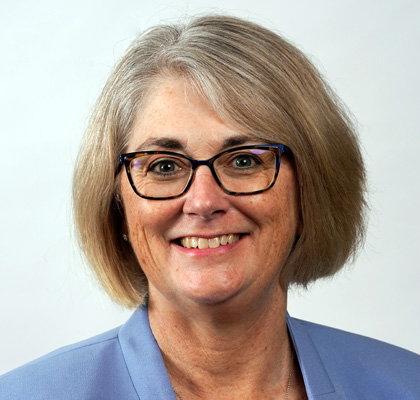 Roberts became the tenth dean of St. Mary’s School of Law on June 1, 2020. A legal educator for two decades, the majority of her career has been spent in clinical teaching, supervising law students in providing assistance to underserved members of the community. She also brings a wealth of administrative experience to the role.

Roberts is committed to a collaborative approach in the advancement of faculty teaching, research and scholarship. She is engaged in working with faculty and staff to improve  mentoring, bar preparation, career strategy and overall student success. Roberts is eager to partner with alumni in building on St. Mary’s School of Law’s reputation as a premier Texas law school, reaching for unprecedented heights in the coming years.

Roberts earned her Bachelor of Arts degree from Randolph-Macon Woman’s College in Lynchburg, Virginia, with a double major in Biology and Psychology. She practiced law for eight years as a solo practitioner and later as a managing partner of a civil practice law firm after earning her law degree from William & Mary.

She began adjunct teaching at William & Mary Law School in 1997 and joined the administration in 2000. Roberts became a member of the clinical faculty and Director of Clinical Programs in 2008 and was named Clinical Professor of Law in 2014. In 2017, after holding numerous administrative and academic positions, she was named Vice Dean, a position she left to become the Dean at St. Mary’s.

As Vice Dean, Roberts was William & Mary Law’s chief academic officer, responsible for academic programs and policies that are essential to an excellent legal education. She  simultaneously served as the Director of Clinical Programs, overseeing a center and nine legal clinics that provided pro bono representation to underserved clients in Virginia’s Hampton Roads area. The school’s first in-house clinics, including those specializing in veterans’ benefits, elder law, special education, appellate and Supreme Court litigation, and coastal policy, were created during her tenure as director.

Roberts has been a nationwide leader in legal efforts to aid veterans. She was the inaugural President of the Board of Directors of the National Law School Veterans Clinic Consortium. She also was the creator of Military Mondays, a program that began at William & Mary Law School that now provides advice and counsel to veterans in numerous Starbucks locations across the country. She speaks on veterans’ law and access to justice topics nationwide.

Roberts was a commissioner with the American Bar Association’s (ABA) inaugural Veterans Legal Services Initiative and served on the National Coordinating Committee of the ABA’s Military and Veteran Legal Services Network. She previously served on the Virginia State Bar’s Access to Justice Pro Bono Coordinating Committee and their Section on Legal Education Board of Governors. She is on the Advisory Board for the Troops to Teachers Virginia Center, and a member of the Veterans Advisory Council for William & Mary.

Roberts has been recognized at both the state and national levels for her service. She was inducted into the American Bar Foundation in 2017 and the Virginia Law Foundation’s 2016 Class of Fellows. In 2015 she was selected as one of the Influential Women of Virginia by Virginia Lawyers Weekly. Most recently, she was selected as a William & Mary Woman of Influence for 2019-2020.

Roberts is the host of EdUp Legal, a podcast about legal education and its future.