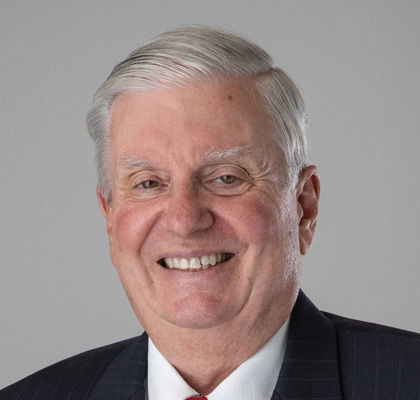 Schlueter received his B.A. degree from Texas A&M University in 1969 and his J.D. degree from Baylor University School of Law in 1971. In 1981, he received his LL.M. from the University of Virginia. He served on active duty as an Army JAG Corps officer from 1972 until 1981 and, during that time, served as an appellate counsel at the Army’s Government Appellate Division as Chief of Criminal Law at Fort Belvoir, Virginia, and as a faculty member in the Criminal Law Division at the Army’s Judge Advocate General’s School in Charlottesville, Virginia.

He resigned his regular Army commission in 1981 to accept an appointment by Chief Justice Burger to the office of legal counsel to the Supreme Court of the United States. In that position, he provided general and special counsel advice to Chief Justice Burger, the Court and the individual Justices. He retired with the rank of Lieutenant Colonel in 1997 from the United States Army Reserve, JAGC.

In 1983, Schlueter accepted a position on the law faculty at St. Mary’s University in San Antonio, Texas, where he has taught evidence, trial advocacy, constitutional law, criminal law and criminal procedure. He served as an Associate Dean for Academics from 1984 until 1989. He served as the Director of Advocacy Programs from 1999 to 2017 and as the Hardy Professor of Trial Advocacy from 2000 to 2017. In 2002, he was named an Outstanding Law Faculty member.

From 1988 to 2005, he served as the Reporter to the Federal Rules of Criminal Procedure Advisory Committee, a position to which Chief Justice Rehnquist appointed him. He is a fellow in the American Law Institute and is a Life Fellow of the American Bar Foundation and the Texas Bar Foundation. He is regularly listed in Marquis’ Who’s Who in America and Who’s Who in American Law.

Schlueter’s publications include numerous law review articles and 12 books. In addition, he has two self-published texts which he uses in his courses. His articles and books have been cited over 1,500 times by state and federal courts (including the Supreme Court of the United States) and legal commentators.